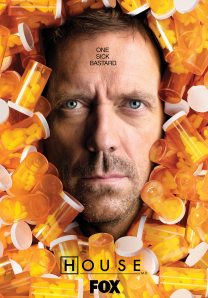 I’ve been a fan of House MD since it started.  Each episode has it’s own twist and turns which captures the audience attention.  The setting is at Princeton Plainsboro Teaching Hospital where the initial lead cast of six is working.  The six are Dr. Cuddy who’s the dean of medicine and hospital administrator, Dr. James Wilson, who is House’s best friend and an oncologist, Dr. Foreman, Dr. Cameron, Dr. Chase, diagnostic team of Dr. House and the antisocial, drug-addicted Dr. Gregory House, expert in diagnostic medicine.

From Season 1 to 3, the stories revolve around solving diseases affecting their patients.  However, it ended with Dr. Foreman and Cameron resigning and Dr. Chase fired.  In Season 4, House held a competition like interview process to form a new team.  The new team is composed of plastic surgeon Dr. Taub, Number Thirteen Dr. Hadley and radical thinker Dr. Kutner.  Dr. Foreman returned and join the group as Cuddy’s eyes and ears.  Dr. Chase moved to the surgery department while Dr. Cameron moved to the ER.  Dr. Wilson find a love interest in the form of “cutthroat bitch” Amber.  Amber was part of the 40 doctors who vied to be part of House’s team.  At the end of Season 4, Amber died due to fetching House from a bar as he was drunk.  When Season 5 started, Dr. Wilson quit and severed ties with Dr. House.

Well.. let me tell you about this episode.  House’s “father” died and her mother wants him to attend the funeral and give a eulogy.  House being who he is, doesn’t want to go and is being uncooperative.  The team received a patient who’s Asian and was initially diagnosed as having SARS.  To prevent everyone who had contact with her infected, they needed to be injected with medicine.  Cuddy injected House claiming everyone’s afraid of putting a needle in him.  What House didn’t know was, it’s a ploy to get House into Wilson’s car and be driven to the funeral.

On the way to the funeral, confrontations arose and House admitted that his father is not his real father.  He told of finding out when he was 12 due to a birthmark in his head which matches to one of his father’s friends.  So, when he gave the eulogy and paid his respects, he used a nail clipper to clip a small part of his father’s earlobe.  He had it DNA tested to check if he is really his father.

The patient on the other hand was getting worse and they don’t know what is wrong with her.  Through a conversation after the funeral with Wilson, he learned that the girl must be one of the babies that were unwanted in China at a time when the one child policy was strictly enforced.  The baby was supposed to die as they inserted 3 pins in her brain.  However, the baby lived and was adopted by a US couple.  In the end, they removed the pins on her brain and Wilson came back to the hospital as an oncologist.

So.. what made it special?  We learned several new things about House wherein he has a birthmark on his head, his father is not his real father, how Wilson and House became friends and how it is in China during the 1980s especially if the baby you’re carrying is a girl.

When I first came to China and taught English, I asked this issue to my colleagues.  Before, boys are favored more than girls.  Right now, it doesn’t matter any longer to people in some places.   The government does not allow pregnant women to know the gender of the baby before giving birth.  Culprits will be heavily fined.  It is legal to abort a baby if you already have one or if not yet married.  Having several children will incur a fine for each additional child unless you receive a permit from the government.  It may sound barbaric but that is how they control their population.