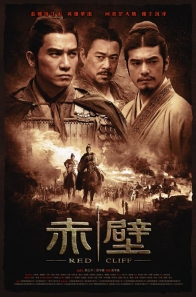 After 2 weeks of agonizing and looking for friends to watch this movie with me. Marco, Richard, Emerson, Liza and I watched it last night at UME International Complex near the apartment. Each ticket cost RMB 50. My only comment about the cinema is it’s small and the screen was too big from where we sat. Heh!

A lookback on what happened in Red Cliff 1 can be found through this link to my review of that movie. Red Cliff 2 features the ultimate battle between the North and the South. The battle is all because of a woman which the Prime Minister would like to have but can never have. It’s not purely a war film but also an educational experience. You will see where the Chinese acquired their love for football and drinking. The way to prepare tea and read the weather. If you’re diligent, you could probably quote “Sun Tzu’s art of war”. Mulan also came into the picture through Sun Shucai who pretended to be a soldier to spy on the enemy. Homing pigeons which was a thing of the past were also used as message carriers.

I’m not much on the war scenes but I enjoy the strategies they used to win the war. My favorite was how Zhu Ge Liang was able to acquire 100,000 arrows without breaking a sweat and killing anyone. Then, the way they were able to trick the enemy to killing their best naval men because of a letter. Of course, the best known trick in the world, using feminine wiles to trick the enemy. Xiao Qiao delayed the attack by distracting the Prime Minister and offered him tea.

In the end, the South prevailed but in every war there are no victors only victims. I would consider this movie one of the best I’ve ever watched. It’s not deep enough that it’s boring but it’s not shallow that you just watch it once and forget about it. I like this better than the first part.

Verdict: 5 out of 5 (Learning experience and action scenes)